The 2016 Ontario Budget made headlines for its changes to student financial aid in Ontario. By repackaging and re-focusing existing financial aid programs, the Government of Ontario has made a bold promise: that for certain low-income students in Ontario, tuition will now be “free.”

While improving access to postsecondary education is a welcome policy goal, it is important to recognize that the 2016 Budget makes no additional real public investment in university operating budgets. Our universities are already the lowest funded in Canada on a per-student basis, and this situation will continue to worsen. This will have predictable effects on the quality of education at Ontario universities. Class sizes will continue to rise without new funds to support full-time faculty hiring. The number of precariously employed professors will also grow, trapping many in insecure, unsupported positions. While the government has moved to increase access for low income students, the worsening financial environment begs the question, “access to what?”

More to the point, declining per-student funding puts increasing pressure on tuition fees to rise in order to fill the financial gap. As of last year, tuition fees surpassed public funding as the majority source of university revenue. Without new investment in universities, the government may end up under-cutting its own access policies.

Changes to Ontario’s financial aid system was a marquee feature of this year’s budget. The Government of Ontario packaged the policy change as “free tuition” for low-income students (those from families earning less than $50,000 a year). But this is not a change to the province’s tuition fee policy – fees can continue to rise by three per cent a year. It is a change in the way financial aid is administered in the province. Essentially, the government has created a new grant – the Ontario Student Grant (OSG) – that will offset the average cost of tuition for the average low-income student.

This is a positive change in the current financial context, characterized by high fees and large public loan programs. With the highest tuition fees in Canada, it makes sense for Ontario to focus more financial aid on those most in need of support. But the new policy does not represent a significant increase in the amount of money Ontario puts into financial aid. Rather, it is a restructuring of how existing funds for student assistance are distributed, accompanied by an active communications effort.

Funding for the new grant for low-income students comes from two main sources:

 The existing Ontario Tuition Grant, Ontario Student Opportunity Grant, and Ontario Access Grants. The Budget states that 100 per cent of the funding of these programs will be directed to the new OSG.

 The government will eliminate tuition tax credits, previously available to all Ontarian students and their families, regardless of financial need. Revenue derived from the discontinuation of this tax benefit will be re-directed to the OSG.

The government claims that students from households with income lower than $50,000 will graduate with no student debt, and that more than 50 per cent of students from households earning less than $83,000 will receive non-repayable assistance in excess of “average tuition.” The government also suggests that no students will be worse off under the new program, and most will graduate with less debt. The veracity of these claims will need to be tested once the program has been implemented in 2017. At present, insufficient details are available to make detailed projections.

Adjusted for inflation, the projected funding allocations for 2018-19 in this year’s budget have almost fallen to 2006-07 levels. Between 2017-18 and 2018-19, the Government of Ontario is projecting a zero per cent increase in funding allocations for universities. When inflation is taken into account, this is actually a significant cut to university operating budgets.

Considered on a per student basis (and this is per “eligible” student, as defined by government), inflation-adjusted operating allocations from the Ministry of Training, Colleges, and Universities (MTCU) has been falling since 2008-09. This year it is on the cusp of being 11 per cent lower than eight years ago. If enrolment projections from universities’ strategic mandate agreements and current patterns hold, per student funding in 2018-19 could drop to 19 per cent lower than 2008-09. That’s a significant loss in revenue.

Preliminary estimates for 2014-15 show Ontario’s per student operating grants are already sitting 36 per cent behind the rest of Canada average. With no change in direction in this budget, this gap is now set to widen even further.

The provincial government may be counting on lower enrolment to mitigate against this decline. Fewer students will mean the drop in operating funding will be less acute on a per-student basis. In the past, government has also allowed universities to make up some of the lost public funding with increases in tuition. While the financial aid changes announced in the 2016 Budget lessen the psychological and up-front financial impact of high educational costs, these benefits could be swiftly undercut if tuition fees continue to rise.

The province’s tuition fee policy is up for review next year. To ensure the financial aid changes remain effective, tuition fees will need to be controlled. Without recourse to higher fees – which are undesirable anyway – universities will need new public investment to protect educational quality.

Interestingly, the government continues to develop policy around funding, tuition fees, and financial aid in relative isolation from one another. OCUFA has long argued that these three elements should be viewed as part of a unified funding system. Doing otherwise will produce incomplete and contradictory policy provisions.

GOOD JOBS IN THE UNIVERSITY SECTOR

Declining public investment in universities also means no new money to support increased hiring of full-time faculty. Recruitment of new professors and academic librarians has not kept pace with the rise of enrolment, leading to a serious faculty shortage. According to the latest provincial data, Ontario continues to have the worst student-to-faculty ratio in Canada at 30-to-1.

As full-time hiring has lagged, the use of precarious academics has grown. OCUFA estimates that the number of courses taught by individuals in insecure, unfairly paid positions has doubled since 2000-01. This trend has professional and personal consequences for these talented teachers and researchers. It also has implications for the quality of education at our universities, simply because precarious academics do not have the same support and resources from the university.

Over the last year, the government has been engaged in a review of the Employment Standards Act and the Ontario Labour Relations Act. OCUFA has been actively engaged in this review, making recommendations aimed at improving the working conditions of precarious faculty. We expect the reports of this review soon.

In order to support faculty hiring and good jobs in the sector, it is critical that the government make new public investments in the sector. The 2016 Budget fails in this regard, and therefore fails to address both the faculty shortage and the rise of precarious work.

Other budget measures of interest include:

 A reiteration of the government’s expectation that unions and associations in the Broader Public Sector reach agreements with “net zero” compensation settlements. As in past budgets, this expectation is not accompanied by any legislative or regulatory measures.

 The announcement of a review of the Colleges of Applied Arts and Technology funding model, similar to the review conducted in the university sector.

 A review of the existing solvency funding framework for pension plans. We are seeking more clarity on the scope and goals of this review from the Ministry of Finance.

 Limited funding for university-industry collaborations, such as $35 million over five years to the Advanced Manufacturing Consortium involving McMaster, Waterloo, and Western.

 No increase – or mention – in funding for basic research at Ontario universities.

WEBSITE FEEDBACK. If you have any ideas or questions about the LUFA website, please email us, and we'll get back to you as soon as possible. Thanks. 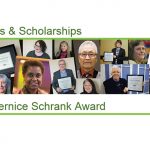 Call for Nominations for Bernice Schrank AwardUncategorized
Skip to content